Back to page
Add topic

Tried to fix the "Shadowfang" typo, but it doesn't seem to be registering. Need to fix it so it says "Shadow Fang," as is the bosses proper name. Update: Nevermind, got it fixed

The page currently claims there are 4 areas, but I'm only getting 3. The 2nd of the 3 I see seem to be selected from a the paths identified on this page as belonging to Areas 2 and 3, but I've yet to track whether all those options can appear. Am I missing something? Scribe100 (talk) 10:40, 16 July 2014 (UTC)

During one of the previous updates, map sizes across almost all of S1 were reduced by 1-2 maps out of the original cap of 4. Most reductions merge part of one area into part of another. As an example, a 4->3 map reduction might have Map 1 be the original Area 1, Map 2 be Areas 2 or 3, and map 3 be Area 4

Thanks. I've started fixing these. I'm beginning with the easier missions that my weak character can more easily run multiple times, so I can be sure I'm seeing all the variations. Might take me a while to work back to this mission. --Scribe100 (talk) 14:26, 8 August 2014 (UTC)

You recently updated "Decisive Battle", with one of the additions being a Mad Grizzlepaw mid-boss. I've just rerun all the documented maps on "Normal" and didn't encounter Mad Grizzlepaw. Any ideas what's happened? Did you strike a map we don't have documented? So far, my experience is that "Hard" doesn't add any extra mid-bosses over "Normal", but I've yet to try Hero Mode. Were you doing Hero Mode? Or were you on "Warrior's challenge" for oath of honour? Maybe they're adding extra mid-bosses that don't appear on "regular" runs.

Hi! I was certainly not in Hero Mode, but unfortunately I don't know wether I was running in Normal or Hard mode. I'm not sure about Warrior's Challenge either. I was trying to get a Bryialne Heart, so I was doing the battle many-many times in a row, when I suddenly ran into Mad Grizzlepaw. I will try to run the battle a few more times and experiment with the different settings. I'll keep you posted. --TomTungsten (talk) 11:58, 24 May 2015 (UTC) 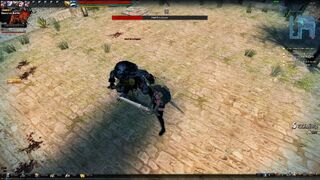