Karok hails from the Herdlands, a mysterious plain far to the south of Colhen and Rocheste. Only fragments of legends come from that part of the world, tales of a mysterious race of nomadic giants slow to anger yet terrible when their ire is raised. Indeed, prior to his arrival, many “sophisticated” northerners scoffed at tales of giants. Now that Karok walks among them, his presence raises almost as many questions as answers. Why is he here? Why has he thrown in his lot with the people of Colhen and Rocheste? Where are the rest of his people?

Karok himself provides no answers. While he is reserved, he is by no means unfriendly. Give him a smile and he’ll offer one in return. Chat with him about the weather, the war, or the finer points of battle technique and he’s as garrulous as the next man. Ask him about his past or where he comes from though, and you’ll be pushed off with that same smile and silence.

Karok is a giant of a man. In the real world, he would stand approximately seven feet tall and clock in at about 400 pounds. In-game, his character model towers over the other playable characters in terms of both height and width. Karok's power shines from his Pillar and Cestus, along with their abilities and his own.

Karok wields his Pillars to perform powerful attacks that combine offense with defense, which eventually culminates into three powerful Beast Stances. Many of his attacks trigger Absorb Shock, which allows him to reduce any damage received then regenerate the HP lost. Supplementing his standard attacks, Rhino Gore, Bison Charge and Mammoth Force trigger stances that grant passive bonuses to recovery, speed, or damage. After throwing his Pillar to inflict range damage, Karok can also switch to his bare hands for faster strikes, then Grizzly Sprint a large distance to recover his pillar.

The Cestus unlocks Karok's two powerful brawling styles that have higher risk than Pillar, but are very powerful. Cestus' primary strength comes from Blast: Destroyer, which grants Karok's smash attacks guaranteed crits. By using Blast: Crushing Strike, Blast: Terror Rush, and Active: Gigantic Strength to keep the crit buff refreshed, Karok can maintain 100% crit for the entire fight. Because of the free guaranteed crit, a Cestus karok has greater freedom in Enchanting choices. Cestus's defensive abilities, Weaving and Bobbing, not only nullifies damage, but is the fastest way to gain Blast charges. Karok's secondary brawling style revolves around Brutal Flurry, which deals lower damage, but every hit regenerates stamina and gives Karok very high mobility. It is a good way to recover stamina while keeping the damage output going and an effortless way to demolish lesser foes.

Karok's most unique ability is his ability to grab/wrestle more opponents, even bosses. His Power Grab allows Karok to grab more enemies than others, such as squashing Spiders and Toads like mere insects, pulling Hemdrills out of the ground, rip Wisps into two, and breaking a Vampire's spine. Clash intercepts a boss' signature attack and locks the boss in a struggle of brute strength while his party attacks the boss without fear of retaliation. Karok can also bash a downed boss's head in using Boss Bash, which not only lets Karok do more damage but also extends a boss's downtime. 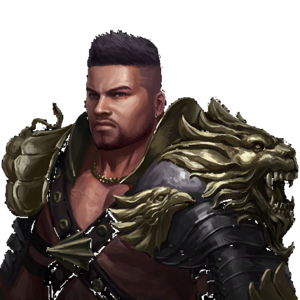 Leaving behind the life at the palace of her kingdom, Delia arrived at the Giant's village in Kaiman Forest, where she learned the Giant's way of fighting. She met Karok in Colhen's Mercenary Office shortly after.

Karok recognizes Delia as his "friend" and considers her to be cute. Delia also recognizes him as an excellent warrior and they became close.

Except for the moments when she's called "friend".