Kai AP skill guide (work in progress, feel free to offer suggestions at the bottom of the page) 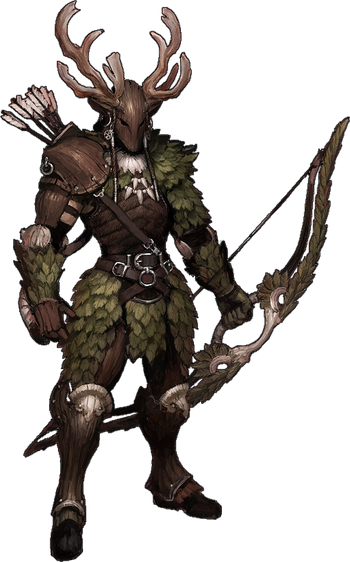 Kai is an archer type character that relies on being at a greater range to be more effective. Although he does have an effective engagement range of 12-15ft; once engaged Kai's range is seemingly unlimited so long as the creature is attacking something. Line of sight and engagement rules seem to be more stringently regulated for Kai than Evie, meaning that Kai can't attack a creature that can not engage Kai in combat. (example: on the level Perilous Ruins there is an area where you have to let the draw bridge down and there are 3 creatures on the other side of the bridge, you can not damage then until you put down the bridge)

Primary Stats: Strength and Will

Strength is your primary stat; increasing your attack. Ranking this is important.

smash attacks. Rank this as quickly as possible.

This is a must rank skill, because it increases your normal attack and

you'll mostly be attacking enemies with your normal attacks like Staff

When to rank: After Combat Mastery

Well, it's a skill that every physical attack character loves.

of your Critical Hits. I recommend ranking this whenever possible.

When to rank: To C ASAP then rank as needed


A Very important skill that makes Stamina regeneration faster.
At rank C it allows you to spam your bow without any down time

=How to Play Kai=

How to Play Kai[]

This section will help you with nailing those difficult headshots.
Now, you may not be able to get headshots on every creature; this is partly due to how
Vindictus judges the head's hitbox.
First you should know what a headshot looks like; you will know when you have
achieved a headshot because the arrow will have an aura around it, it
will also flash when it hits the creature.
You do not have to actually hit the creature in the head for a headshot to count,
the arrow must simply be aimed at the head before releasing the bow. they
Arrows from the long bow have a small
chance to go through the creature and hit other creatures, while still carrying
that headshot damage no matter where the arrow hits.


<more will be added upon discovery>


normal mobs - If you're missing your headshots on normal creatures, try aiming
at the upper right corner of the monster's head. The hitbox is displaced higher
and to the right.

Worm type mobs- Aiming at a worm head will not trigger a headshot because the
top of their body is not their head; instead, aim for their midsection.


wisp type mobs - The head hitbox on wisp mobs is in the upper left corner of the body.

some information is pulled form jlee3195's The First Kai Guide!

feel free to post here, once reviewed your suggestion will be deleted form here and added up top if i like it

[Correction] Battle Respiration skill at rank C allows you to spam shortbow attacks without loosing stamina. Longbow will continue to use up stamina.

[Correction] The aura around Kai's arrows isn't specifically for the headshot. If you release the arrow just after hearing the crit noise when charging the longbow you will fire a piercing shot. (I can almost 100% perform this)

[Speculation]A headshot is more when the mob has a red critflash after the arrow has hit the head.

[Speculation]I still need to test but I believe that the Piercing arrow follows a slightly different pattern than a normal arrow. I can 80% of the time get a headshot with normal arrows but with piercing arrows that % drops to around 30-40. Again this could just be me.

[Speculation] A normal arrow may not break off (or does alot less damage) than a piercing arrow.

[Correction] Difficulty should be the easiest.

[Correction] While in Longbow mode any fully drawn shot(you'll hear the crit sound and see a tiny flash by the bow) will fire a piercing arrow. This arrow will have a yellow aura and can "pierce" enemies, allowing you to hit multiple enemies with a single shot (it can also multi hit certain raid bosses like the giant spiders, if shot from front or back)

[Correction] The longbow's piercing shot is also capable of Break Offs, while still being considered a "normal" attack. The only other Bow attacks capable of break off (that I've gotten) are the Magnum and Eagle Eye Assualt.

[Correction] Headshots will show a red critical flash instead of a white flash, any arrow from longbow can be a headshot (aura or no aura) and arrows, must hit the head for a headshot to be counted.

[Suggestion] I think Chain Link should be added, even at low levels it can restrict the boss while you heal or unleash the full fury of your most powerful attacks

[Suggestion] Long bow shots that are a smash (right timing) fly further and have more power than short bow shots. Erg pots can mostly only be destroyed with smash long bow shots if the erg pots are far up on a pillar like in "decisive battle" for example.