Hurk, a mysterious new mercenary, may look like a handsome young adventurer, but he hides a dark secret. He's often found in the shadowy corners of inns, brooding over a mug of ale. Other warriors know to avoid him- Hurk's temper is short, and sparking it means signing your own death warrant.

When he hears the sound of steel clashing against steel, Hurk becomes a bloodthirsty berserker. With his mighty greatsword, Hurk has been known to chop enemies in half, and cut through hordes of Fomors in a heartbeat.

Hurk functions as a berserker. He, like Karok, fights on the front lines to deal massive damage and relentless assaults while also receiving damage as well, with his sheer willpower to support both his offensive and defensive prowess.

With a Greatsword, Hurk can do slow but hard hitting attacks that can be repeated almost indefinitely. Hurk can chain his normal and smash attacks without pause, and can sacrifice health to continue his onslaught should he run out of stamina. To complement his defenses, Hurk has two evasions that grant him huge damage reduction while being able to heal the damage received, along with another evasion that grants invincibility frames. Furthermore, he also has two parries that can interrupt a boss's attack, and continue exposing the boss's vulnerability, allowing him and others to take advantage of the opening. Finally, unlike other characters, Hurk has not one, but two abilities that trap a boss.

Due to his sheer lethality and survivability, Hurk can easily be defined as overpowered, but has some drawbacks to his game. All of Hurk's attacks use a very large amount of Stamina, leaving him tired after a few seconds of battle. Most of Hurk's attacks are also somewhat slow and have a narrow hitbox range, making it difficult to land some of his hits as enemies can easily move out of the way. As with all characters, Hurk's evasion and parry requires impeccable timing and can be difficult to master. Hurk's Active skills also have longer cooldowns than compared to other characters, for example Terminus's cooldown is three minutes while other characters who rival that skill such as Evie's Active: Reverse Gravity have a cooldown of only two minutes. Like Kai, Hurk is also heavily reliant on SP. Finally, unlike other characters, all of Hurk's combat skills require him to be at high levels in order for them to be ranked, preventing him from reaching his full potential early on. However, Hurk's strengths outweighs his weaknesses, but in the hands of a highly skilled player his flaws can be made completely irrelevant.

Overall, Hurk is a powerful rushdown warrior, possessing strong offense and defense capabilities and is capable of opening and exploiting holes in boss's attacks, but is easily exhausted after just seconds of fighting.

As of August 31st, 2017, Hurk has obtained the Teide, a combination of a longsword and a heavy shotgun. The complete article can be found here. 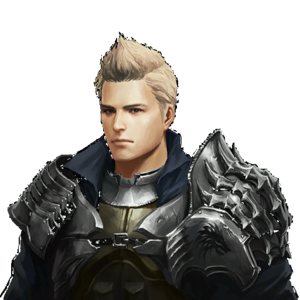 Wandering the East in search of a new weapon, Hurk stayed at Miri's house for a while, helping Miri's brother in the process.

Of course, Hurk who doesn't remember people by their names, and remembers Miri, whom he met again in Colhen, as a girl with unusual looks.