A soldier of the Royal Army. A soldier in every sense of the word. She is disciplined, cautious, and dutiful. She was sent to Colhen to suppress the Fomor threat. Because of the prolonged conflict with the Fomors, she has returned to Rocheste to aid the Royal Army. She is a subordinate of Keaghan's.


Gwynn was dispatched to Colhen by the Rocheste Garrison of the Royal Army in order to investigate the Fomors. Gwynn is cold and aloof, but also strong and capable. She is the epitome of Royal Army excellence.

She is extremely strict but is very loyal to the Royal Army. She used to be Keaghan's assistant until she was dispatched to Colhen.

The disobedience of the mercenary "rookie" (the player character) frequently bothers Gwynn, such as when the player enters Ainle and the Prairie Entrance despite the Royal Army ordering mercenaries not to enter.

During the course of Chapter 6, the "rookie" manages to rise quickly in the ranks, to the point where Gwynn is assigned to work under them. Gwynn takes this as an insult, but tries not to let that interfere with her duties to the army. Chapter 6.5 explores this relationship even more.

Spoiler: (Episode 8) After the defeat of Glas Ghaibhleann, her, Keaghan, and the Royal Army Captain exit the Catacombs. The group spots Riordan and his Royal Army Troops (while Gwynn and the Captain lay low behind boulders). After Riordan labels Keaghan a traitor, he gives the order for his soldiers to fire. However, Gwynn immediately rushes to Keaghan's side and pushes him out of the way, sacrificing her life for her old officer. 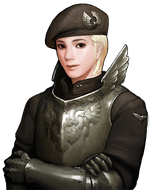