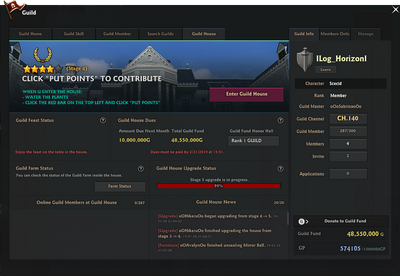 How to get into guild house[edit | edit source]

Most of places are interactive. You can eat at the Banquet Hall, you can sleep at Bedrooms or dance in the Club.

Here you can plant Luminary and Ore Deposits, doing so will put them on a timer that will take them a few hours to fully grow. This process is sped up by members of the guild by watering them.

In order to water the plants you need to:

This is only possible to do once per day for each character in the guild. Each Watering Can speeds up the Growth of 1 Deposit by 1%. Planted Deposits can be used up to 5 times before they needs to be re-planted. This is especially important for upgrading the Guild House, as Farm Points are a necessary step to reach a new Stage.

This feature of the Guild House is only unlocked once reaching Stage 3. It contains several features, such as a Dance Floor, Bar, Jukebox, Mirror Ball, and Dungeon.

The Jukebox is an unlockable feature in the Club room. The unlocking process is initiated by an Administrator or the Guild Master by spending 8m from the Guild fund and from there it is slowly unlocked over time. Members of the guild can speed up the process of unlocking it by supporting it once a day, this action is free of charge. Once fully unlocked, it can be used to play any song or theme that is currently in the game. This will cause the entire house theme to change, so no matter where you are in the Guild House you will hear it.

The Mirror ball is another unlock in the Club room. It is unlocked in the same manner as the Jukebox, for the same price, and can also be sped up by members of the guild. Once it is fully unlocked, you can activate it to cause players on the dance floor to start dancing, chracters can also use other character dances under this effect.

This machine is on the back deck of the guild hall, right before reaching the top floor. It is an unlock that allows you to pay 500 gold every 8 hours for a random seal.

In the Laboratory on the bottom floor is the Fortune machine that must first be unlocked. You can spend 1,000 gold every 24 hours to get a Daily Fortune Scroll that must be used within an hour of obtaining it. It will give you 1 random stat boost varying from somewhat useful, to highly useful. i.e 100 ATT or 1000 ATT.