Grimden is a deadly assassin. The unbearable pain he experienced through his childhood has hardened his heart, gradually making him detached from the rest of the world. His excruciatingly painful childhood turned the once pure-souled child into the ice-cold assassin he is today. He was kidnapped as a child from his family. The kidnappers made from him a weapon that kills without emotion. One day, when saved by a kindly old woman, he falls into trouble. He must decide if must kill his adoptive grandmother or his teacher. In the end, he makes the right decision and becomes free. The only thing that bothers him now is the past. Although he desired to change his behaviour and not kill, he finally realized- the past can't change, but future can. So began his new life.

Grimden currently can use only one weapon type. That weapon is named Katamadhar. Katamadhar is a special one handed sword. This unique one handed sword allows high mobility and dishes out big damage. This type of the sword is typically seen only in the hands of the most skilled assassins, like Grimden himself.

Grimden prefer striking enemy in the back to get bonus damage from Shadow Ambush, like what is said in the description for his normal attack (Agile Strike) and smash attack (Mortal Arts), knowing when to switch to the other attack during a chain is crucial to deal the most damage ( normal attack to get in, smash to deal damage).

Grimden had quite a few ways to quickly get behind an enemy's back: Decimation quickly move Grimden behind an enemies and deal massive damage to bosses, while also instantly killed normal monster, and can chain indefinitely to other targets (at the cost of increasing cooldown). Aerial Evasion and Dark Charge are tools to help reposition Grimden in battle. However, his most interesting skill is Active: Phantom Strider, which turn Grimden dash into a short blink with almost no recovery between blink, allow Grimden to quickly zip across the battlefield in record time, with low SP cost, long duration, and relative short cooldown, it turned Grimden into the fastest character in the game.

Grimden's main damage skill is : Decimation, and Active: Spine Snap, with low SP cost and short cooldown. Active: Cleave deal nice damage but had long cooldown and can be very tricky to hit, while Active: Million Daggers is a usual 3 bars defensive skill.

Overall Grimden is a hard character to play, he prefers to play in party where the other members can grab the boss's attention, allow him to freely do his backstab gimmick. Knowing his kit and utilize them to reposition is crucial, while also required some precise button input (as mashing button can lead to a very bad Aerial Smash and Active: Cleave) He's also suffer from technical problem with Decimation, causing him to get stuck, move to wrong place, or miss, which greatly reduce his damage potential. However, the feeling of speed and being untouchable from Active: Phantom Strider,is itself an experience one can find quite satisfying. 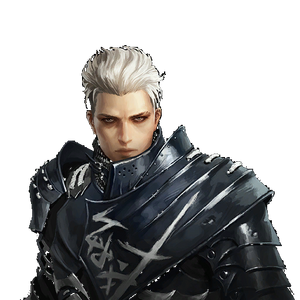 Evie, who wants everyone's happiness, hopes Grimden, who has an unhappy past, will also find happiness.

With her unique sweetness and healing magic, she helps Grimden overcome the wounds of both his body and mind.

Grimden also fully opens his heart to Evie, who leads him to the light.