Fiona is a balanced warrior who wields a sword and a shield. She values defense, so she uses her shield to protect herself during combat and then strikes strategically when enemies aren't expecting it. She is able to wear heavy armor from the start and later learns to wear plate armor as well. Gearing a Fiona for end game requires light armour (to use the best scrolls).

Fiona comes from the south. She treasures her privacy and boasts a solemn, serious personality, so no one knows how she came to join the Crimson Blade mercenaries. She rarely speaks about her past. Even as people marvel at her combat abilities, they can't help but wonder what secrets she's hiding.

Fiona is best described as a one man (woman) army, possessing great defense with her shield and dealing slow but devastating attacks.. She can utilize either a sword or a hammer as her weapon. She can also choose to use either a small shield, which has the ability to deal powerful counterattacks, or a large shield, which has superior defense. She does not overwhelm the enemy with slashes like Lann or Vella, but has slower smashes that deal an incredible amount of damage with a single hit.

Wielding a Longsword, Fiona can exploit the enemy's openings with a strong smash. She will strike at small openings with a simple slash, but strike at large openings with an extremely damaging kick. Wielding a Long Hammer, Fiona's attacks become even slower, but she is able to use different, potentially more damaging attacks. Her normal attacks are more powerful, can build SP and deal critical damage. She is able to use a smash that can be repeated over and over, dealing massive damage if uninterrupted. While the enemy is far away, she can charge up an attack, allowing her to unleash an earth-shaking strike much more powerful than the Longsword's kick when the enemy comes near.

When Active: Slashing High is used, the longsword-wielding Fiona can repeatedly chain Active: Focal Point, which normally consumes large amounts of stamina, to deal enormous amounts of damage. With a hammer, Slashing High will give Butterfly Swing a new combo, which concludes with a devastating Stigma Hammer.

Even as Fiona attacks, she is able to parry enemy strikes with Shield Deflection. She will momentarily pause to deflect the attack, then proceed to resume her own attack. This allows her to keep up a nearly relentless assault of attacks.

As a shield using tank, it is Fiona's responsibility to do damage while nullifying attacks done to her by blocking attacks with her shield or outright avoiding the attack. Although she lacks the speed of Lann's slashes and Evie's magic arrows, she is capable of covering large areas with her sweeping attacks, conducting powerful counterattacks, dealing quick sprint smashes, and is the best character in the game when it comes to surviving, especially when it comes to blocking long combo attacks. 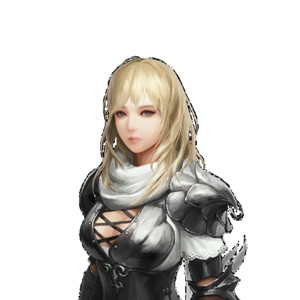