Evie is a magic caster who wields a staff or a battle scythe. With a staff, she is capable of casting a wide variety of distance spells in order to keep enemies at bay - ranging from Ice Spear that can freeze bosses to Healing Corona which restores her allies health; While on the other hand, Evie equipped with a battle scythe is capable of dealing massive direct physical damage from mid to close range, but in contrast loses much of her spellcasting ability.

Evie comes from the east. From her demeanor, it’s likely she was raised in a noble family, but no one knows for sure. When asked, she just smiles and changes the subject. Despite her youth, Evie is a force to be reckoned with on the battlefield.

Evie is the most versatile character in the game. Her ability to create Golems, combined with her high DPS makes her an ideal class for soloing missions. Evie is also a great support character, as she can heal her party members with Healing Corona or Regeneration, buff party members with Insane Reaper, as well as slow down or distract enemies with SP: Clipped Wings as well as Alchemy Box-related items like Alchemy: Mana Pistol. Equipped with a staff, her Magic Arrow allows for continuous damage. After taking a moment to focus, Staff Evie can use long range spells such as Ice Spear and Active: Guided Lightning, which are great for taking out dangerous enemies from a safe distance, as well as Ice Blast and Fire Bolt, which can clear out nearby mobs. In times of danger, she can perform a short distance, yet quick and no-stamina hop to avoid attacks. Flying Sparrow allows her to dodge even further. Against attacks that are highly difficult to evade, she can engulf herself within a Mana Amber for three seconds or until it shatters to protect herself.

When equipped with a Battle Scythe, Evie can use entirely different melee-oriented abilities. Instead of attacking at a distance, she gets close, dances with the blade, slashes enemies to shreds, and culminates with dimension-shaking smashes. Following such smashes, Scythe Evie can prime enemies with "drains", abilities which can leach a small amount of HP from the enemy, steal a portion of the enemy's soul to use as a familiar, as well as place a Mark of Death or Bloody Thread on enemies. Drains can be further strengthened by taking a risk: spending a vulnerable moment "pulling" after the smashes. With a snap of the fingers, all drains placed on enemies simultaneously activate, causing enemies to burst into a bloody mess. Unlike with the staff, in the face of danger, Scythe Evie is able to utilize the Dark Dimension to teleport across a short distance with Blink, phasing through attacks or even through the enemy itself.

Despite her immense power, she has several weaknesses to balance her out. Evie has the lowest HP and defense out of all the classes, so she needs to rely on her Mana Shield, Mana Amber and Blink to stay alive; without these, she doesn't last long. Evie also has the smallest stamina pool compared to other characters. Because of this, a Staff Evie runs out of stamina frequently due to the high stamina cost of her spells. Staff Evies do not do well against faster enemies, as they will often attack her before she can finish casting her spells. However, a Scythe Evie is more versatile in combat, but she also has a vulnerability often after her combos, as she needs a moment to recalibrate for her next attack.

Despite all of this, Evie is still an excellent character to play, and brings a great deal of power and flexibility to the game. 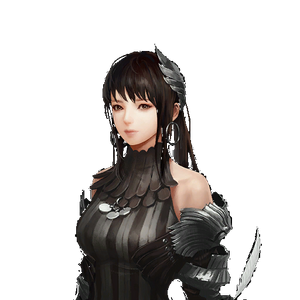 Evie, who wants everyone's happiness, hopes Grimden, who has an unhappy past, will also find happiness.

With her unique sweetness and healing magic, she helps Grimden overcome the wounds of both his body and mind.

Grimden also fully opens his heart to Evie, who leads him to the light.

From the first meeting, Lesser thought that Evie's Reiki was similar to her own.

Lethor, feeling that even the always cheerful Evie will have wounds that she won't be able to overcome, musters the courage to take a step to getting closer to Evie.

Evie is surprised by Lethor's unexpected behavior, but she holds the hand of the only person who understands her inner self.