A novice seamstress who's usually found at the General Store. She's cheerful and upbeat, and was childhood friends with Tieve. She is proud of her older brother who serves in the Royal Army.

Clodagh loves fashion and dreams of one day opening her own beauty salon. She believes the people should care more about fashion than the average person in Colhen. Therefore, she tries to create fashionable outfits. In the meantime, she works tirelessly at perfecting her weaving skills and often designs armor for the Crimson Blade mercenaries. Her optimistic spirit prevails, even on days when she feels inferior to her best friend, Tieve.

Spoiler: (Episode 6) Prior to the events of Colhen in Flames, Clodagh was kidnapped. It was shortly revealed that Warlord Black Hammer was assigned to kidnap Tieve, but stole her friend by accident, upsetting Shakarr. 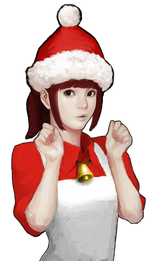